Is A Sideloader A Forklift Truck?

Home/Information/Is A Sideloader A Forklift Truck?
Previous
Next
Categories: Information

Picture a forklift, search online for forklifts or ask your precocious child to draw a forklift and mostly what you will see is a counterbalance truck. Forks at the front, operator in the middle, counterweight at the back.

Search-engine-savvy forklift truck dealers throughout the land are quick to point out on their ‘history of the forklift truck’ pages, that the design is over 100 years old, has links to the railroads and something called the tructractor and blah, blah, blah.

What Type Of Forklift Trucks Are There?

Demand for the forklift as we know it today, sprung from some key milestones: the introduction of electrically operated masts; the need to efficiently shift armaments in WWII; and, perhaps most crucially of all, the standardisation of pallet sizes. 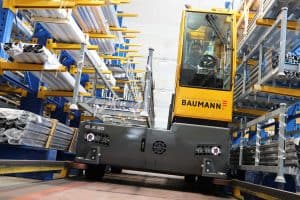 Find some old black and white photography of a forklift and there’s no overhead guard. That’s because they weren’t being used in high bay racking, mostly to load a lorry bed, there was no need for overhead protection as the loads were kept low to the ground.

Fundamentally, lifting things higher and further away from the equipment’s centre of gravity puts more strain on the machine (think a pile of books in outstretched arms). In time, and with advances in design and materials, manufacturers were able to develop trucks with strong enough axles and heavy enough counterweights (a lump of weight at the back) that enabled higher and heavier lifting capacities.

Fast forward to the modern day and we have skinny forklifts for narrow warehouse aisles with masts that reach out (Reach Trucks), stand up ones that have tiller arms instead of wheels (Pallet Trucks and Stackers), wire guided ones that take the operator up with them (man-up VNA, the VNA standing for Very Narrow Aisle), shorter ones with heavy batteries acting as a counterweight (3-wheel electrics) and even bendy ones that pivot in the middle (Articulating VNA).

The impetus for these design types is a relentless drive to maximise storage space, usually indoors, to give the warehouse operator the opportunity to put aisles closer together and store or earn as much as possible from within his cube.

(Ultimately, top-down automated robots like AutoStore may prove to be the end-game for this particular arms race.)

Outside the warehouse cube, there’s still the need to move palletised loads and put them on trucks, without quite as much pressure on space. It’s possibly why these machines haven’t changed that much in their design.

Yes, we have telehandlers that forego a mast in favour of a telescopic arm, ones with wheels that twist (whilst trying not to dig up the ground) and a plethora of safety, comfort and productivity features that help manufacturers differentiate their offering, but essentially, they drive forwards, lift at the front, and stack up as high as needed.

Annoyingly, when these pallet perfect machines are launched, they will often be shown with loads that are clearly not pallets. A boom in attachment designs, including block grabs, hooks, jibs, cages, and, er, booms for carpets or steel reels, now makes the forklift capable of lifting pallets and lots more besides. They also come in different capacities to deal with heavier loads too. Together, these lead some users to think that they are suitable for absolutely anything…

So Is A Sideloader A Forklift Truck?

That brings us back to the question, is a sideloader just another type of forklift? Essentially, they are not the same. 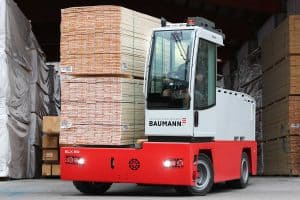 The burgeoning forklift industry perhaps influenced its design in the early years, but in truth it has its own distinct lineage linked, not to the war effort or to pallets, but to the timber / forestry industry.

Timber, and other long loads, offer a different challenge when being moved. Lifting them in the centre means you have them at their most stable point.

Having a bed to lower them on to means they don’t tip or deflect when being moved. And it’s not about the weight in front, it’s about being able to transport them lengthways, or, sideways, if you will. This not only makes them more manageable but allows them to go down aisles and though doorways with ease.

In these ways, the sideloader is not the same as a forklift truck. Operating one requires a different skillset, but most counterbalance truck operators quickly adapt.

Sideloaders are also capable of handling pallets, are used in cantilever racking, are occasionally rail-guided, and can be fitted with pantographs to provide the capability of two-deep block stacking.

So, yes, the sideloader certainly falls within the materials handling category, but it’s not a forklift.

Now, is it really a type of lorry?! That’s a whole other question…