What is a side loader forklift?

A side loader forklift, also known as a sideloader, is a piece of materials handling equipment designed for long loads.

The operator’s cab is positioned up front on the left hand side. The area to the right of the cab is called the bed or platform. This contains a central section within it, called the well, where the forks are positioned.

The mast and forks reach out to lift the load at its central point and lower it onto the bed.

The load can then be safely carried on the bed with the operator facing forward.

The whole of the machine can be tilted horizontally, to improve load picking and security, much like a tilting mast on a forklift truck.

Baumann side loader forklifts also feature automatic deck leveling. Once set, the bed will remain horizontal, even as the wheels travel across uneven ground. 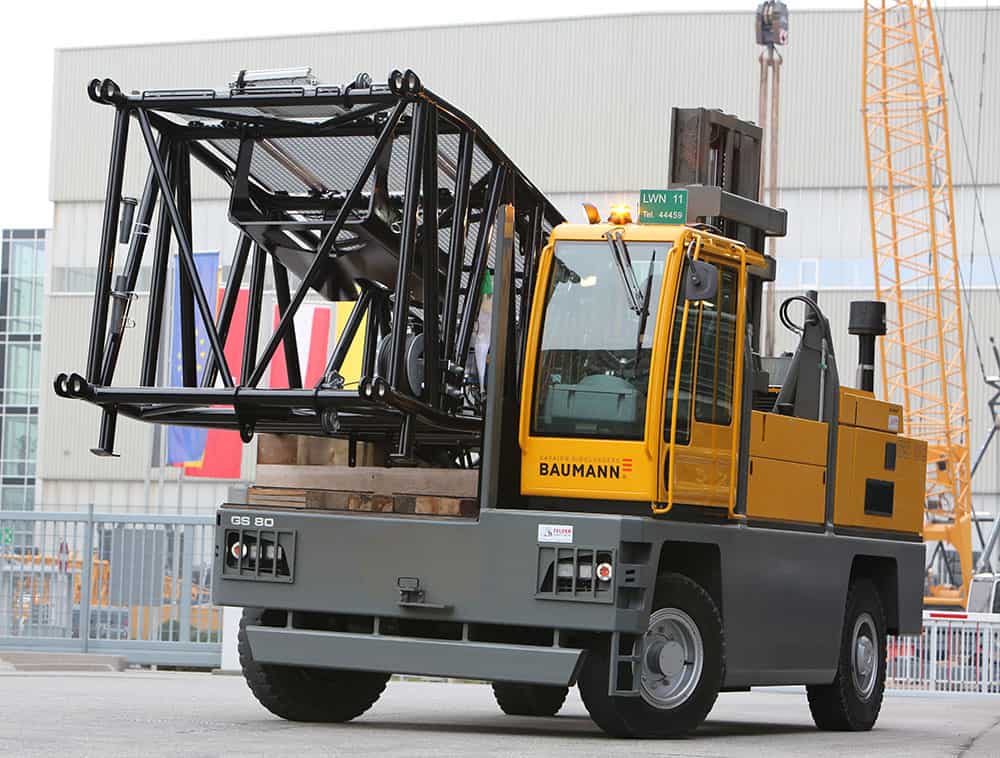 Baumann has been designing and building sideloaders for over 50 years.

The average capacity of sideloaders sold by Baumann has increased year on year.

What is a side loader forklift used for?

Side loader forklifts were originally developed for the timber / lumber industry.

Since those early years, they have become increasingly important in the steel, plastics and concrete industries.

Carrying a long load with a forklift presents a number of difficulties.

It is difficult to see the width of a load when moving forward with the forks lowered.

Travelling with the forks raised, however, is incredibly dangerous, and the main cause of tipping accidents.

Sideloaders travel forwards with the load secure at the side. Travelling long distances or through narrow doorways and aisles is simple.

As a result, loads are stored in smaller areas, increasing efficiency, safety and productivity.

Conversations around sideloader forklifts, side loaders and side loading, typically involve long loads and narrower aisles.

The lift capacity, load type, whether wide or long and heavy loads are also important.

Ultimately, lifting loads with a diesel sideloader or an electric sideloader has often proved safer and more productive than fork lifts in timber, steel, and other heavy loads industries.