EGX the obvious choice for Lynx

The zero emission machines, with single piece battery above the deck, can operate around the clock thanks to intelligent chargers and a simple battery change process by crane or forklift pockets. 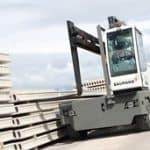 Established in January 2014, Lynx Precast design, manufacture and install precast concrete flooring products. The business has made rapid progress from its Ashington base, in Northumberland, where over £2 million has been invested, making it the only facility in the North East of England that produces both T Beam and Hollowcore flooring.

Based on the site of a former Alcan aluminium smelting plant, the fast-growing business has a readily available supply of electricity from the neighbouring power plant. It made a switch to electric an obvious choice, however the ongoing requirements of the production and dispatch areas meant battery run time was a significant factor.

“We were eager to get the Baumanns on site as quickly as possible,” said director, Andy Teasdale, but the electrics are in high demand! We chose a diesel machine initially, but the electric machines were always in our thoughts, and now we have them we are delighted.”

“Concrete manufacturers are synonymous with diesel trucks,” says Jason. “With so many improvements to electric technology over recent years however, the 120v EGX machine is a proven match for the performance and shift life of diesel trucks.”

Capital costs of an electric machine are now on a par with diesel, as Stage V emissions requirements have driven engine production costs up and electric vehicles have surged in demand.

The cost of running an electric truck is also significantly cheaper than diesel, as it comes without Adblue costs, higher fuel costs – set to be more pronounced when red diesel taxation changes are applied –  and with engine maintenance now more intensive, the servicing costs are also significantly lower.

“We are the only people that make a 120volt sideloader with a single piece battery above deck, it is becoming one of our best-selling products. It will go into all major applications,” said Jason, “even with shift changing you can get a full day’s performance.”

Once on site, the electrics have also proved popular with operators. Said Andy: “The operator’s comments were very good. It’s everything we wanted to achieve with a sideloader, visibility is really good, consequently much easier to load on and off stacks and vehicles. We’re really chuffed.”

Despite the innate strength of concrete products, they can be over six metres in length and require careful handling when storing and loading for distribution.

Driven by a chain, the extended carriage enables the forks to spread outside the width of the chassis. The forks can also be brought in to the well for use as a traditional sideloader. It allows the truck to handle shorter products and the long hollow core products made on site.

To provide additional flexibility, a lifting and lowering rear fork was added to the EGX with plus or minus 100mm of lift to protect the product from damage by allowing the levelling of the load to match a trailer, or for when the ground is uneven.

The fork spread and lifting rear fork are operated by electronic joystick with capacitive sensing – the sensors detecting electromagnetism in the hand to ensure the mast or forks are not moved accidentally.

Concludes Jason: “It’s a very responsive and intuitive machine and it’s great to see the popularity of the electric trucks increasing and the positive impact they have on companies like Lynx. They have a new machine that improves their operation, comfort and productivity and they get fuel and maintenance savings immediately.”

Based in Cavaion on the shores of Lake Garda, Baumann has led the sector for over 50 years, and now sells its products worldwide through over 100 dealers in 76 countries. The double Fork Lift Truck Association Innovation award winner produces equipment up to 60 tonnes capacity, and has a reputation for consistent invention and the highest level of design and productivity. In recent years, a number of important markets for Baumann have seen equipment capacities increase and industries such as timber, steel and concrete producers rediscovering the art of working sideways.