What does the future hold for sideloaders?

Home/Information/What does the future hold for sideloaders?
Previous
Next
Categories: Information

“Reports of my death have been greatly exaggerated.“

Well, that’s what Mark Twain was supposed to have responded to alleged obituaries, but like most widely repeated quotations it seems, the quote itself is an exaggeration.

Nevertheless, we can take it as inspiration for our quick delve into sideloaders and their future.

Since the proliferation of the counterbalance forklift, followed by the rise of multi-directional machine and consolidation of manufacturers in, what is for some, a ‘niche’ market, the demise of the sideloader has been widely expected.

At least, that’s what you might think. The truth is, relative to forklifts, sideloader markets have always been modest, and how do you predict a shrinking market in a sector that is difficult to quantify?

For Baumann at least, the future has never looked brighter. Sales are at record levels. New markets are emerging in North America, Asia and Australasia, and trucks are getting smarter, cleaner, and more capable.

The machine was developed with the timber industry in mind, and remains incredibly popular, but the rise in steel users, particularly stockholders that want to maximise their storage capacity without resorting to overhead cranes, has expanded the sideloader’s horizons.

Similarly, pre-cast concrete has also been a developing market, and that sector’s rapid expansion and technological advances has seen a growth in demand for sideloader-friendly loads such as pipes, beams, wall panels, staircases, floors, and columns.

Sideloaders have also moved into newer markets, as capacities and capabilities have increased. Within those metals and timber sectors the ability to move more or heavier loads has pushed the development of larger capacity machines. This is a trend that will surely continue.

We’ve often said, and still say, the future is electric. That’s almost itself becoming old, as upwards of 85% of our orders are for battery powered models.

More than two years ago our MD, Klaus Pirpamer, was already seeing the reasons why:

“Today’s performance is even better than the equivalent diesel truck, especially in terms of lifting and driving speeds.

The lifetime of the battery is nowadays easily good enough to cover a full shift with normal charging patterns. We still hear are the drivers saying that they aren’t as fast enough and don’t perform as well as a diesel truck, but every time we perform a race, the electric truck wins, much to the driver’s surprise!”

At that time we were seeing a development in the battery, charging and motor technology, but also in the lifting capacity and the options. From 3 to 8 tonnes, if you compare the cost, performance and aftersales side, quite simply there’s no reason not to choose electric.

“You have the emission issue,” “added Klaus, “the driver has a better environment and the cost is even better than the diesel. Ultimately, there are not many reasons why operators need to buy a diesel truck anymore.”

Fast forward past a global pandemic, conflict in Ukraine and a global supply crisis and the trend continues, thanks perhaps to widespread energy concerns and cost-conscious customers.

“There are other technologies out there,” says Baumann UK’s Mark Bann, alluding to the hydrogen fuel cell developed by Baumann in the noughties, “and maybe the infrastructure will catch-up and allow it to proliferate, but lead acid is proven battery technology.” 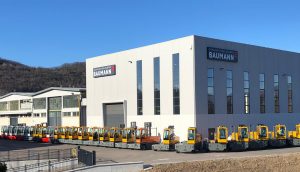 The 2022 LogiMAT exhibition in Stuttgart offered an insight into the thinking of manufacturing over this past disrupted period. Two technologies stood out – lithium battery power and automation. How will these effect the sideloader market?

Lithium power is an easier one to predict. It is impossible to ignore and is now an option in much of the materials handling sector. Lithium’s great advantage is in allowing ‘opportunity charging’ but its detractors point to higher purchasing costs and high demands on the user’s power supply.

It could be argued that the slight differences in the way sideloaders are used, the capabilities of the 120v Baumann machine today and the successful history of lead acid battery use so far has dampened demand for lithium in the sector. Perhaps however, this is a temporary situation.

Automation is a trickier feat to pull off and the future is less clear. Our friends at Kalmar are certainly making headway in adding remote driving to larger machines and this may point a way forward. We already have the capabilities to monitor operations remotely and even control some functions wirelessly, but these are exceptions rather than the rule.

Driver assistance features – cameras, pedestrian detection, visual and audible alarms, impact detection – all are already available to assist the human operator. That person remains a crucial part of the process for the foreseeable future.

There’s no doubt that consistently sized pallets and totes make automation an easier prospect for logisticians. Long loads are a different story. Unlike warehouses which can be tightly defined, sideloader users are often working inside and out. The transition of machines between multiple environments and over longer distances makes automation more complicated, but not impossible. As ever, commercial realities will dictate if this development will one day make its way to the sideloader specification.

We have been manufacturing and supplying sideloaders to the steel industry for over half a century. We understand our side, and we listen to you to learn from your side.

That means you get a product that is perfect for your needs, to help your business grow and to protect your team.

Get in touch with us to see how we can help. Email info@baumann-sideloaders.co.uk or contact us here.