Baumann has launched a new GX Series of five to eight tonnes capacity award-winning diesel sideloaders at LogiMAT 2019, the International Trade Fair for Intralogistics Solutions and Process Management in Stuttgart.

The new models are the first to include the Variable Reach System (VRS) which builds on the company’s award-winning Archimedes outreach method, adding further control and durability for demanding sideloader applications.

The new range also features changes to the chassis, Tier 4 Deutz TCD 3.6 diesel engines (74.4kW at 2,000rpm with Diesel Oxidation Catalyst), refined ergonomic cabins and new joystick controllers, offering what the company believes to be the highest levels of durability, productivity and control in the market.

Baumann’s first prototype of the direct drive Archimedes screw and sliding blocks method of extending the fork carriage was developed in 2011. The worm gear system was the first major development in sideloader outreach design in over 40 years and was well received by customers for allowing highly accurate control and the maximum working speeds. Eliminating unnecessary stresses and power demands also meant overall truck productivity improved. 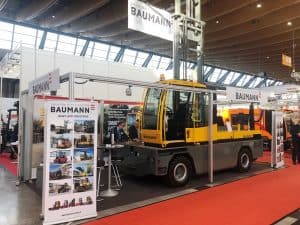 With VRS, the addition of a bespoke valve block, modified chassis and additional guide bar to increase inertia resistance has allowed Baumann to double the Archimedes spindle thread size and corresponding number of bearings. The result is a halving of the pressure required between the two, providing even greater accuracy and the ability to seal the spindle head to prevent contamination.

“Our aim was to produce a maintenance-free solution,” says technical director, Riccardo Bove, “and build on the advances we’ve made with the original Archimedes outreach system. Customer responses were incredibly positive, but we are always looking to improve. We set about providing a Tier 4 engine model, and this allowed us the opportunity to modify the chassis and add the VRS.”

Using the experience from new components developed for Baumann’s electric ranges, the technical development team worked with the valve bank supplier to improve its performance, allowing movements characteristic only to sideloaders and new options, such as the choice of electronic or manual joysticks. The result is a bespoke bank that can be shared across the range and the cost and convenience benefits of a more consistent parts stocking.

Changes have also been made to the GX Series general hydraulic system to improve efficiency and pressure flow. The result is a more durable design, fully compliant with emissions regulations and yet with more sensitive control via a new hydraulic system.

“We are developing new improvements and new models all the time,” explains managing director, Dr Klaus Pirpamer. “Some changes are regulatory, such as the stricter emissions standards, and others come via our own experience and expertise. The new GX range is a combination of the two, with upgraded engines and chassis, plus the increased reliability and innovation for which we have become known.”

Baumann has become known throughout the industry as a pioneer in sideloader technology, and was recognised in 2016 with the FLTA’s Innovation award, and has been nominated three times in 2019. The new GX received a positive reception from visitors at LogiMAT, and is already in production with models due for delivery before the end of 2019.

Concludes Klaus: “Change has occurred at an incredible rate in recent years. Electric models have outpaced engine power by some margin, however we still have a strong demand for diesels. We are developing stronger, faster and smarter technology, and our customers know that the world’s best-selling sideloader continues to improve with each new model.”

Based in Cavaion on the shores of Lake Garda, Baumann is a family-owned company that has led the sector for over 40 years, and now sells its products worldwide through 106 dealers in 76 countries. The 2016 FLTA Innovation award winner produces equipment up to 50 tonnes capacity, and has a reputation for consistent invention and the highest level of design and productivity.